CORKY GETS A CAGE 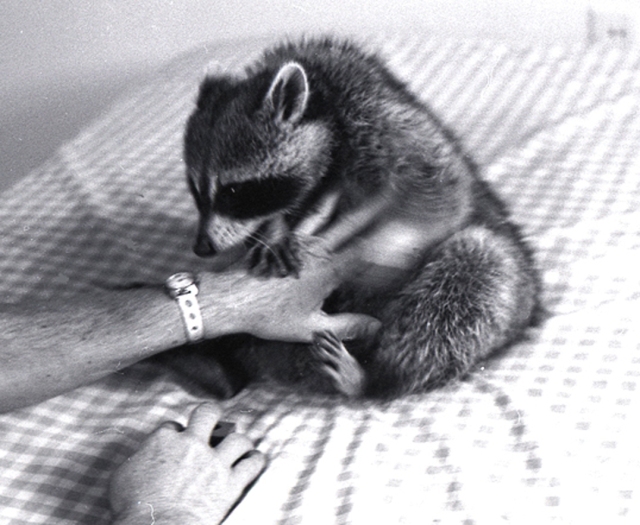 When your baby starts walking then running around the house getting into everything you cannot watch every minute. A play pin becomes a necessary option at least for short periods of time. Raccoons have all of the curiosity of humans but lack the restraint of movement. All four appendages can grab, run, jump, and climb simultaneously at lightening speed. A busy homemaker is no match for their ability to circumvent every coon proof idea that you can conjure up.

Courtney thought that he had the answer to keep me from kicking this still adorable menace out of the back door. He built a playpen that was more like a cage. It was constructed out of heavy wire with a top covering made of the same material and secured at intervals. It was huge; so big that there was room for water and food bowls, Corky’s litter box, and toys for play like his beach ball. In addition there was room enough for some running and exercise. Hanging upside down shaking the wire  from the top in an effort to get out was the first maneuver and became a favorite! By the way it is not true that coons wash everything that they eat with water. Corky dived into his food bowl with gusto; scrambled eggs were gone in a flash! Never once was anything washed. Our studio was the largest room in the home so the cage was installed there.

Both Courtney and were artist so the studio was filled with easels, all sizes of canvases in progress, and art supplies of all kinds including oil paints. Previously that door had been closed to Corky so having it open was great. I began to spend much more time on artwork and only had to endure Corky’s cheering which he resumed at full force. Still, that was a small  price to pay for my creative freedom besides I could turn the music up to drown him out! Corky also spent time outside of his cage when other family members were at home patrolling his escapades and playing with him.

Occasionally Corky found a way to escape on his own. Each time the cage was reinforced. At night no one worried about him getting out and the door to the studio was closed. After all there was nothing for him to eat! The most that he could do was scramble art supplies or knock over a few easels. Wrong! I got up one morning, opened the door, and there he was with a tube of oil paint in his hand. It was all over him plus just about everything in the room! Later when cleaning it up it was evident that when he could not unscrew a cap on the tube he merely bit into it. And it wasn’t as if he had not eaten dinner the night before. He was the most well fed coon anywhere!

My screams woke Courtney up. He was livid! One of his in progress paintings had been altered as if the mess was not enough. He chased Corky down, opened the adjacent garage door and pitched him into his new residence locking the door.

I am a visual artist and teacher of Fine art working and teaching in all 2D media. You can see images of my work in many categories, view my biography,comment on artwork, see what's on the easel right now, and more when you go to https://fineartamerica.com/profiles/junepauline-zent I will be blogging here about personal true stories and sharing my life and work. I hope that you will comment and share yours with me!
View all posts by artzent →
This entry was posted in Wild and tame animal stories and tagged artwork, cages human intrest, raccoons, stories, true stories, wild animals. Bookmark the permalink.

2 Responses to CORKY GETS A CAGE