I PROMISED YOU continued five 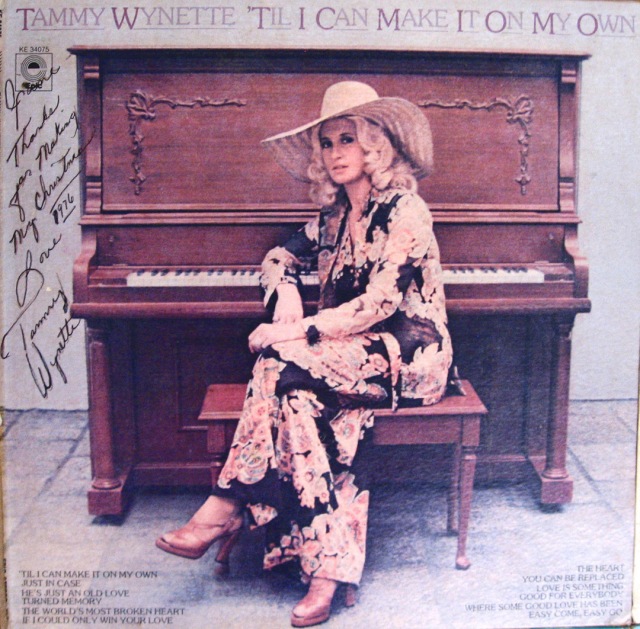 An old demo album cover of Tammy Wynette’s  songs given to me on the occasion of my first visit to her beach house in Jupiter Florida personally inscribed and referring to a gift of my artwork to her from Burt Reynolds. Every time I delivered a commissioned piece to her she would sign one of these covers with generous comments.

One of my favorite pictures of Tammy Wynette photographed at Jupiter Beach, Florida This is one of  many never before seen photos  that I took for a commissioned piece using her hands. You will see how I used it in a future post.

Of course Buddy called soon after I talked to Tammy anxious to get my reaction. I was thrilled at the thought of meeting my favorite country singer not to mention the prospect of a commissioned piece of artwork. But by then I had figured out that he gave her They Walked Together  to bring Tammy and I together. So I had just a little twinge of disappointment left.

Arriving at her ” beach house” on Jupiter Island I was quite impressed; accustomed as I was to these structures being little more than small dressings rooms convenient to the water. This was in my eyes a beach mansion! She met me at the door with a big smile and an even bigger hug. What a beautiful woman! She didn’t know me from Jack in the Box but was so welcoming and real that I instantly felt a connection and was not at all intimated by her celebrity status.

After introducing her four beautiful girls and walking through the lower level of the house she led me upstairs to her bedroom. She pulled out a guitar and sat down on the bed motioning for me to do the same. “what’s your favorite song?”she asked. Then she sang it to me right there and I was completely mesmerized and thrilled! This world-famous ” First Lady of Country Music” giving me a personal concert. I was transfixed and speechless. ” So you can imitate me?” she asked. I could only nod yes. She picked the song and I have to say we did pretty well together bursting out laughing at the end and clapping like a couple of teenagers. It reminded me of when my sister and I would sing in the kitchen to make the dish washing go faster.

Then she got serious. ” So tell me about your family and your life” she said. Except for an occasional sigh she sat quietly while I sketched the last few years then she wanted to talk about the commission: a portrait drawing of Buddy’s hands that she intended as a reciprocal gift to him. I explained that I would love to do it but only if I had complete artistic licence  to compose the piece as I saw him. This was the usual condition of any artwork that I agreed to undertake.With that we settled on a price and went back downstairs. I had not noticed before but she pointed to the huge fireplace where They Walked Together was hanging under an overhead light. Moving closer I could see that the original plack had been removed with a new one in its place. It read ” Georgette and Paw Paw”

That was the only sour note of the visit. On the way home I pondered: How would she feel if I had renamed one of the original songs that she had composed? But the name that I gave it was the one that stuck and it has had a long history over the years. I had many visits with Tammy and the girls to come . We became close friends with much in common including Buddy.

They obviously communicated with lightening speed. The phone rang just as I walked into the house. He was full of praise about her report of the visit and said that she was delighted. Then he wanted to talk about his health problems. He called me a “Good Witch” and asked me what I thought was wrong with him. I said,” If I were a good witch don’t you think that I would help my autistic son; he would be the first one on my list”  “Oh no”, he shot back, ” a good witch  cannot help themselves they can only help others”. I said, “five years of pre med does not make me a doctor but it does make me very sceptical of fairy tales!”

Please return for the continuing story six right here with me.

I am a visual artist and teacher of Fine art working and teaching in all 2D media. You can see images of my work in many categories, view my biography,comment on artwork, see what's on the easel right now, and more when you go to http://www.artzent.com. I will be blogging here about personal true stories and shareing my life and work. I hope that you will comment and share yours with me!
View all posts by artzent →
This entry was posted in The Story of I Promised You, True Stories About Artwork, Uncategorized and tagged art, Burt Reynolds, celebrities, country singers, family, famous people, movie stars, photos, Tammy Wynette, true stories, word press. Bookmark the permalink.

12 Responses to I PROMISED YOU continued five